On a hot, smoky and dusty day in the San Juans, I was forced to settle for my C- goal of gutting out (pun intended) a finish.  If anyone knows the Vickers family please tell them that I’m sorry, and promise next year I’ll carry a barf bag.  Also, to anyone who saw me emptying my stomach, well, I just hope it wasn’t contagious.  My race wasn’t always going so badly, in fact my race plan lasted longer than usual, a whole 20 miles!

There isn’t too much to say about the first 4.5 hours of my race in terms of running.  I chatted with Doug and enjoyed the morning, and was ecstatic to avoid getting my feet wet, I even avoided tumbling off the narrow logs that allowed for my dry passage.  My only goal was to make the first climb and descent feel effortless, regardless of the pace it required.  I saw my friend (and rival for the season) Brian at the Williams aid station (15) and learned he had dropped due to a shoe malfunction.  This was significant because it meant that I could catch up in our cumulative season race time contest (he established a 40 minutes lead at the Salida Marathon, Speedgoat is next).  All I’d have to do is finish - easy enough, right?! (For the record, had Brian’s insoles remained in tact, I’d have been a long way back.)  On the dirt road that connects Williams and the Carson section I accepted that the heat would prevent me from achieving my (probably unrealistic) time goals.

Things started getting interesting on the climb to Carson.  I noticed the heat as the road took us into the sun, and that it was only 9 in the morning, and that the streams I wanted so badly to avoid at 6am seemed rather appealing now.  Doug pulled away, slowly at first but then in a manner that suggested I would not being seeing him again for a long time.  JT passed like a man on a mission and then then I lost count of the rest.  However, something interesting and awesome happened at the end of this section; the aid station appeared much earlier than I expected.  They had sunscreen, Coke, race-website worthy views and the breeze above treeline was refreshing!  Just like that my mood and energy turned around.  I wasn't making great time up the remaining climb to Coney Peak, but I was happy to be moving well again.  Andy caught up to me while I was playing in a waterfall and scooping snow for my hat, and the next 2 miles passed rather quickly.  I turned to pee on the last switchbacks (last chance to add to the Pacific Ocean!) and he was out of sight.  When I reached the summit it was empty.  I'm too much of an exposure wimp for many summits so I went the 20 yards out of my way to tag Coney.  What it lacks in grandeur it more than makes up for in cairn height and views, both of which were impressive.

The remainder of the divide section passed in a rather predictable pattern - I ran the flat and downhill sections, and hiked when the trail turned upward.  My stomach was stable and I didn't feel like I was force-feeding myself, but the altitude and heat were doing their best to sap all the energy I had.  This was the first time in a race where I just wanted to take a nap (this wouldn't end until I finished).  Even Leadville's 4am start and full night of moving didn't put me in the zombie like state I felt.  The panoramas stretched on forever, and soon it felt like this section was too.  I was already running low on water and aid station was nowhere in sight.  I was antsy at first, and then annoyed, anxious and annoyed again.  Where was this place!? It seemed like I could see the next 2 miles of trail around some meadow, surely I had to be closer than that.  Finally, the tents and food revealed themselves around a corner, tucked behind some trees, well before the meadow.

I left the aid station with a stomach full of watermelon and broth.  In an effort to keep everything down I decided to walk for three minutes.  Three minutes turned into three minutes and the next course marking, then three minutes + the next course marking + the top of this hill, etc... I was lethargic and down.  It was no longer possible to ignore the smoke that hung in the air, so I was glad to have trained through the High Park Fire.  If nothing else, I was smoke-acclimitzed.  On the course profile, this section looks like one long downhill for 9 miles, but I found it to be much different than the graphic on the back of the race shirt.  I kept waiting for the course to head back to the valley and finally it did, but I found out that running downhill wasn't as easy as it seemed it my mind.  Eventually I found some semblance of rhythm and thought that I'd turned my race around.  I ran into the mile 40 aid station and a blur of activity, I was out with Dakota before I really knew what hit me.

The last 10 miles....where to begin...  The puke fest started as the trail exited the trees of Vicker's Ranch and directed us across a large, hot field.  It would not end until 6 hours after it started, in the garage of the Lake City Clinic with an IV in my arm.  Part of this story is funny, because I spent 4.5 hours walking 10 miles.  It's funny because I threw up, uncontrollably, and a lot.  It's funny because I shot watermelon out of my nose as a snot rocket and thought that was funny when it happened and consciously thought "oh, watermelon is great when I'm puking because it tastes just fine coming back up".  It's funny because I was with Dakota, who, in his entire life, has not been passed as many times as we were passed.  It's funny because Dakota kept commenting on how hot it was without the helicopters providing a constant breeze.  It's funny because I sat at an aid station for 15 minutes to keep food down, walked 100 yards and puked it all up.  To paraphrase Ryan Burch - I was watching people walk past me and just wished I could walk as fast as they were.  All this is only funny because I finished and at the end of the day I was healthy.  None of this shit was funny while it was happening though, in fact it was a little scary because I had no idea how to fix it.  I was working just as hard, if not harder, to just get up from a log after puking than I was while running the Divide section.  Yes, it sucks when the most effort you can give is a measly walk, especially when you are walking downhill, but when it’s all you can do, it’s all you can do.

14:40+ minutes and no injury is still better than last years DNF and plantar issues, so I guess you could say I'm improving. (a BIG thanks to those who were concerned about me on the trail and after the race, next year I'll figure out how to finish and enjoy beers at the end). 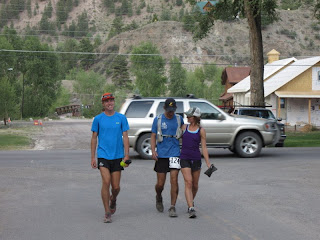